Vertical farming in the heart of a city may sound like the stuff of science fiction but the sky-high ambitions of one engineering revolutionary have turned that dream into reality. Sustainable, environmentally friendly and cost effective, the ingenious Sky Greens system is transporting agriculture from its traditional rural roots to a brave new urban world.

Think of agriculture and your mind will immediately conjure up open spaces, rolling acres and the unmistakable smell of the countryside.

But with more than half of the world’s population now living in urban areas, one extraordinary man has found a way to bring agriculture to the city.

Back in 2009, after 28 years in the construction industry designing housing with automated aluminium and glass systems, Jack was preparing to retire. He had always dreamed of being a vegetable farmer but living in Singapore, a densely populated city-state, it seemed impossible.

“Until I was almost 16, I lived on a farm where we reared pigs and grew vegetables,” he says. “There were lots of challenges in my new career and it was not easy to be a farmer in an urban area. But I thought I could use my experience and knowhow to design something of value to Singapore.”

I thought I could use my experience and knowhow to design something of value to Singapore.”

With vast experience of building structures out of aluminium, he struck on the idea of creating a vertical farm. “It will be perfect for land-scarce Singapore,” he figured. His idea was to cultivate vegetables in troughs mounted on A-shaped aluminium frames, which rotate so that they are all exposed to the sun at some point in the day.

He was advised by the Agri-Food and Veterinary Authority of Singapore (AVA) and after two years of research launched a prototype with his own savings.

One tower produces 100 kilograms of vegetables, which can be on grocery shelves in as little as three hours.”

Today he has a thriving business, called Sky Greens, which produces Chinese Cabbage, Nai Bai (a type of Bok Choy) and other Asian vegetables, as well as lettuce and spinach. The system can be used to grow many other crops, such as herbs, chillies, cucumbers and strawberries. It can grow produce by hydroponic methods, but Jack prefers to use soil that is carefully monitored and built up to improve the taste.

The A-shaped frames, which come in heights of three, six and nine metres, are housed in protective greenhouses. A nine-metre tower costs USD 15,000 to make, providing 38 tiers of growing troughs. Smaller versions can even be used in the home.

“We have room on our site for 2,000 towers, we have already built 1,300 and are using half of them,” says Jack. “It takes just 28 days for a crop to reach the size we need, and less with smaller towers where the plants can get more sunlight. One tower produces 100 kilograms of vegetables, which can be on grocery shelves in as little as three hours.” 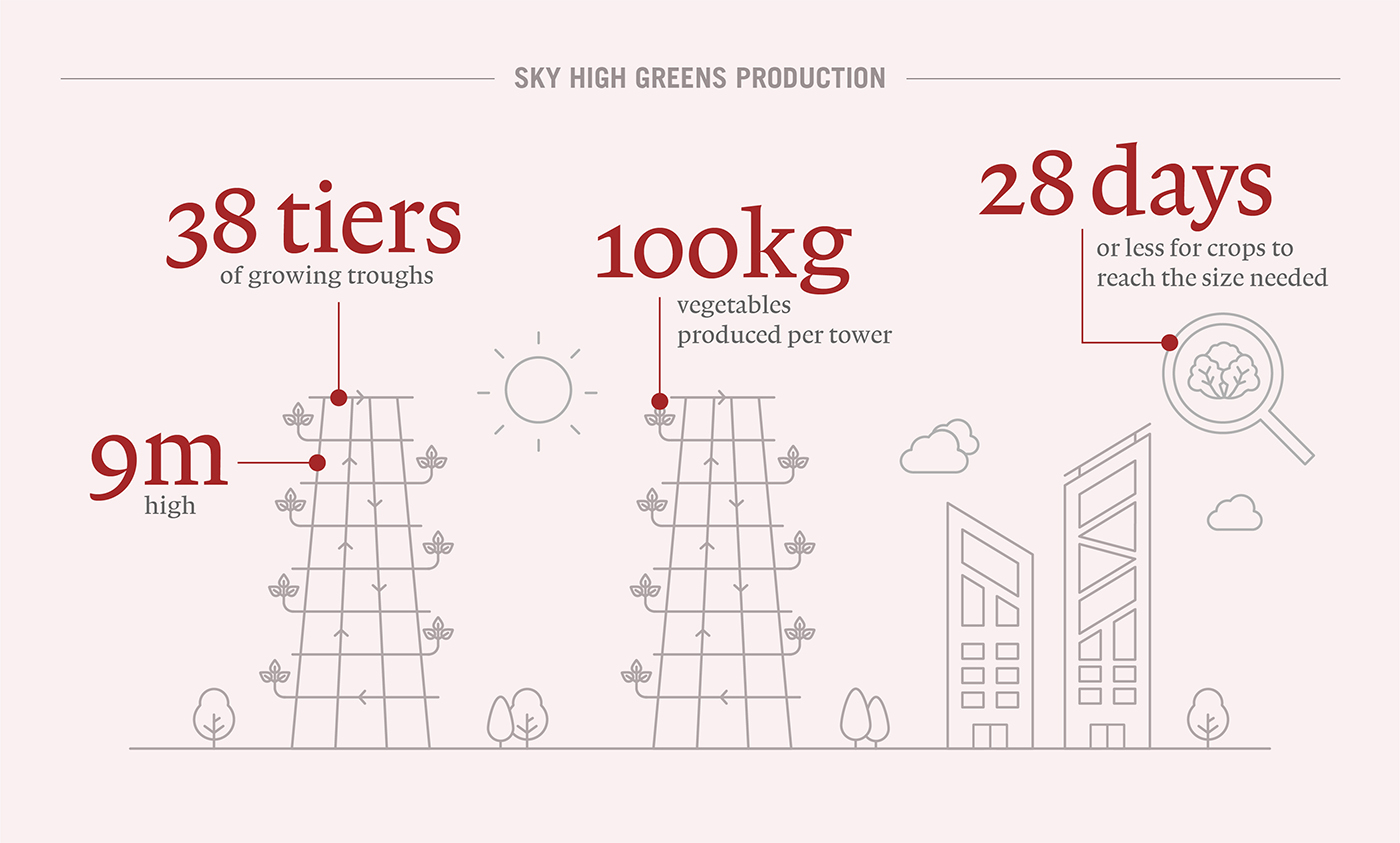 Most of Singapore’s fresh vegetables are imported from countries such as Malaysia, China, Indonesia and Australia, and transporting them results in a high carbon footprint. Singaporean consumers like fresh, locally grown vegetables, which command a premium price over imported vegetables that can take three days or more to reach the shelves.

There has also been significant international interest from Thailand and China, according to Jack, with the company fielding numerous queries from research institutes, investors and NGOs.

The Sky Greens system is both simple and ingenious. Each growing rack is rotated by a hydraulic system powered by small quantities of water dropping down a tube that ends up watering the vegetables. Each tray sits at the top of the frame for two hours before moving down, ensuring every plant receives equal sunlight, irrigation and nutrients.

The electricity supply for 9-metre-high tower is no more than that required to power a single 40-watt light bulb. Just half a litre of water is needed to rotate the 1.7 tonne structure.

While Jack is delighted that his retirement venture has achieved his aim of doing something for Singapore, he is similarly demanding of those who seek to buy his equipment: they must also genuinely want to contribute to society.

He also sees his plants in an unusual light, referring to them as his customers. “I have to make sure they are comfortable in their environment so that they taste good,” he says.

Even the insects that attack his plants are treated as a valuable natural product. To avoid using insecticides, Jack collects them in insect-catchers and feeds the high protein mix to his fish.

“I do not want to be a farmer,” says Jack. “I want to be a solution-provider, helping farmers do agriculture by using my engineering skills.”