Most online fashion retailers have a simple model: consumers look at their websites to search for clothing they want, then buy it.

First, however, many will have scoured glossy magazines and social influencers’ channels for tips on what to wear.

ABOUT YOU takes the lead, bringing both aspects of shopping under one roof. The website – one of the fastest growing e-commerce ventures in Europe – pitches itself as a fashion discovery platform which uses personalised data to offer suggestions of outfits and trends in the same way as the pages of a magazine. 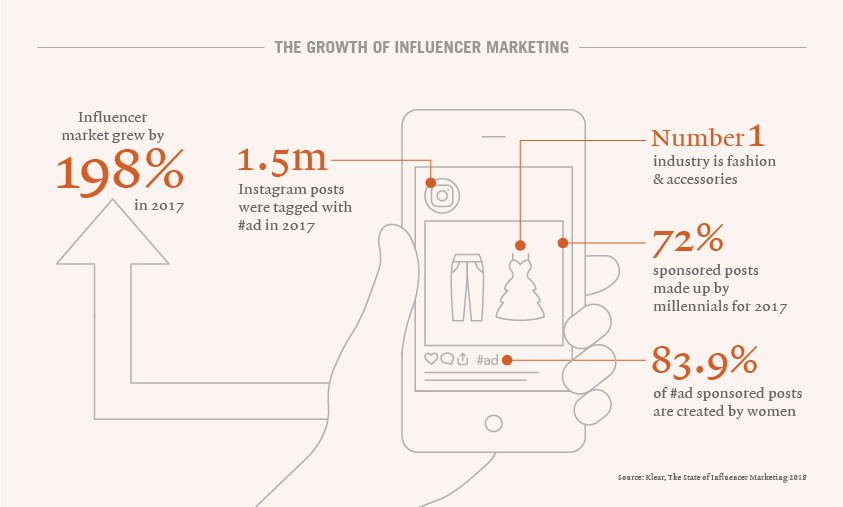 The innovative website is just one example in a wider trend of social influencers taking over from the traditional media – something companies are now quick to both embed and monetise.

And with the rise of the Millennials, this business model is set to be around for some years to come.

Marianne Johnson, US Consumer Equity Analyst for Pictet Wealth Management, says there will be increasing opportunities for similar companies due to the Millennials’ commitment to environmental, social and governance (ESG) practices when investing.

We do traditional advertising on television and outdoor billboards, but the majority of customers know us through social media.”

The Millennial generation – born between 1981 and 1996 – numbers more than 80 million in the US today, making them a more significant population group than the post-war Baby Boomers.

Significantly, they are entering the prime spending years of their mid-thirties, demographically the largest discretionary spenders with average annual spending growth of 3 to 4 per cent.

Over the next 15 years their annual spending will grow by $1 trillion, while the Baby Boomers’ outgoings are expected to drop by a similar amount. This handover in generational spending is happening right now, and investors need to position themselves to capture this consumer spending growth.

Hence ABOUT YOU’s new approach, which co-founder and managing director Tarek Müller likens to window shopping on a smartphone.

Based in Hamburg and operating in seven EU countries, it is proving popular with its target market of women and men aged 18 to 49. Sales are doubling annually, with 10 million unique users every month, who look at the website on average once a week. In 2017, its gross sales were €900 million, with net revenue of €283 million – double that of 2016.

We cooperate with a couple of hundred influencers, and they are paid a commission on the sales of items coming through their recommendations on social media.”

“We do traditional advertising on television and outdoor billboards, but the majority of customers know us through social media,” says Müller.

“Now that we are well known among our target group in Germany, potential influencers approach us and tell us what clothes they would like to model. We cooperate with a couple of hundred influencers, and they are paid a commission on the sales of items coming through their recommendations on social media.”

Müller, who at 30 sits at the heart of the millennial generation, launched his first business at the age of 13 when he was playing computer games with friends on a server that charged €5 a month.

He quickly figured out that the real money was in selling advertising, so started building websites where they could be placed.

“This created a network of online communities and I started to make good money,” he says. “At 15, I registered my first company and when I looked at who was advertising on my websites, I found that they were mainly online shops. Online shops seemed like a great business model, so I started a couple and an e-commerce agency at 18 and dropped out of school.”

In 2011, he sold one of his online retailers to the Otto Group, the German family-owned mail order company which has several thriving e-commerce businesses. Otto asked him to design an e-commerce business with the potential to scale up in the fashion sector and ABOUT YOU was born.

The latest financing round in July 2018 raised $300 million for ABOUT YOU, making it Hamburg’s first ‘unicorn’, a non-listed digital start-up with a company valuation of more than $1 billion.

As a technology-driven company, more than one third of its employees are tech people – a scarce resource who like to switch jobs often to find new challenges.

“Millennials sincerely want to be responsible investors,” says Pictet’s Marianne Johnson. This includes investing into companies which follow traditional ESG and sustainability policies, such as exclusions on tobacco and alcohol industries, as well as broader policies relating to, for example, diversity at company board and senior management levels. “The potential for higher returns from companies that position themselves to benefit from the changing consumption patterns of millennials and centennials should make them especially attractive for investors.”